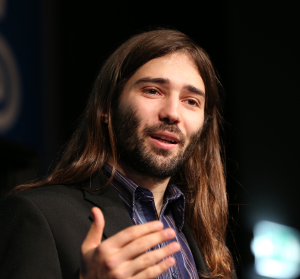 I am a theoretical condensed matter physicist working in the areas of graphene, topological insulators and Majorana bound states. I work as an associate professor in Delft University of Technology, where I lead the Quantum Tinkerer group together with Michael Wimmer.

I finished my PhD at Leiden University in the group of Carlo Beenakker in 2011. After Leiden I went to Harvard university as a Golub postdoctoral fellow, and finally moved to Delft in September 2013.

My research interests are outlined below. For a less formal introduction I also invite you to check out a short article I wrote to introduce myself to the other members of the Kavli Institute.

I also blog and tweet about random, but mostly science-related things.

Much of what I do is covered in the online course that I run together with my colleagues. Check it out.

If you want to make an appointment or just drop by, your chances are better if you check with my schedule first:

My research interests mostly revolve around the field of mesoscopic conductors and superconductors. Very naturally this includes the topics of graphene, topological insulators, and Majorana bound states. I am fascinated by the quantum systems that behave in the most counter-intuitive or unusual ways.

Majorana bound states. One example of an exotic physical object that is simple to analyse but hard to grasp is Majorana bound states (frequently also called Majorana fermions). Consider a combination of simple ingredients. Take conventional superconductors, known for almost a century, and understood extremely well for half a century. Add a semiconducting quantum wire, a basis of modern electronics, but scaled down; these were studied for decades. The amazing thing is that the theoretical and experimental progress showed how combining these two ingredients one can create the special Majorana bound states. Sergey Frolov very properly calls them zen particles, by comparison with the god particle, Higgs boson. They have no energy, no charge, and no mass (which makes them extremely hard to find), and they store quantum information in a way completely hidden from environment. The state of these quantum degrees of freedom changes when they are moved around each other, allowing to implement an alternative route to quantum computation.

Topological insulators. Symmetry has always been a guiding concept in physics, allowing to generalize conclusions from one particular system to many which possess similar qualities. The other concept with applicability that is perhaps as broad is topology. It allows to conclude that certain properties of superficially very different systems must be identical as long as the two systems can be continuously transformed into one another. Topological insulators use a combination of both symmetry and topology. The surface of these materials is guaranteed to be conducting as long as certain symmetry of the material is unbroken, and as long as bulk stays insulating.

Kwant. Numerical simulation of a physical system is a useful and sometimes irrepleacable tool in various tasks. It can be used as a boost or a check of the intuition, it may lead to finding an efficient analytical approximation, or as the last resort in handling the problems that are beyond the reach of analytics. To make the numerical calculations more accessible to the community, me and my colleagues have developed a sofware package kwant, which can be used to numerically solve a broad range of problems in mesoscopic quantum transport.